IT Service Catalog - Why Did Your First One Fail?

IT Service Catalog - Why Did Your First One Fail?

Part 1 of a multi-part story of why you failed and what you can learn from it.

The IT Service Catalog sure looked like a good thing. A way for customers of IT to help themselves, where they could come and easily order the IT services they need – consistently, beautifully, simply and quickly – and they would be happy. They would like IT. A system could help by taking thousands of the orders and requests we have been doing manually – one by one, and we could get a break! We could actually work on improvements.

So we were all on board for this. We worked to create a place where users could come and get things. Lots of things. IT things. We called them services, and they were pretty easy to create – all we had to do was define them, describe them and put them in a web-accessible catalog.

Since it was easy, we created hundreds, maybe even thousands of them. We discovered that there are different "customers" for different services and some of them only make sense to IT people, but aren't they customers too? So we built their services as well.

We were very excited about this, so we told everyone! We "marketed" our soon to be revealed IT Service Catalog boldly, because we were on the threshold of a new future for IT and its customers.

We couldn't wait to go live with our new reality. We set a tight schedule, and we kept to it. The future finally arrived the day our IT Service Catalog went live. The first day was pretty good. We had a lot of people look at it and try to use it. We had a lot of "how do I" and "where do I" calls that we had staffed up for. We helped everyone as best we could. After all, the future of work is going to take a little time right?

It went downhill fast every day after that. Complaints rose daily. Attempts to use it fell daily too. Our customers were angry; they told us our IT Service Catalog was worthless. They were actually madder than they were before we built it.

Within a few weeks, the IT Service Catalog we had worked so hard to create for our customers was roundly being called a failure by our...customers.

Of course, we soldiered on for a while...supporting, helping, driving adoption...but it didn't matter. We had failed.

Don Casson is CEO and co-founder of Evergreen Systems, an IT consulting firm leading Fortune 500 companies to dramatically transform their IT operations. Feel free to contact Don at dcasson@evergreensys.com. 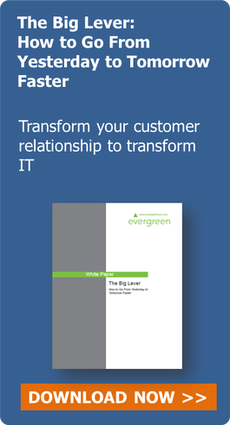